How to take LSD (Acid): A TripSafe Guide 👽

Thank you to Matthew Johnson, Bill Richards, and Roland Griffiths, for all of their scientific research on these subjects.

Look before you trip.

Remember, no drug use is perfectly safe. But you can take LSD in a safer manner if you’re going to use it anyway.

LSD is not risk-free and is illegal. If you’re going to take LSD, trip safe. 👽

“It is highly advised to approach this very potent, unpredictable, long-lasting hallucinogenic substance with the proper amount of precaution and harm reduction practices if choosing to use it.” - PsychonautWiki

What had been clear to Hofmann almost immediately had by this time been observed independently by Osmond and a host of others: for LSD to have the greatest positive effect, subjects needed to take it in a safe, supportive, and aesthetically pleasing environment with a clear idea of what to expect. When difficult issues arose-as they often did-the safe setting and supportive presence of a therapist would allow the subject to process this emotional dynamite, defuse it, and transcend it.1

Tim Ferriss: “I would not recommend that anyone touch psychedelics without professional supervision. There are legal ramifications to consider. I would take it as seriously as you would choosing a neurosurgeon to remove a tumor.”

🙋 Safe use is important to avoid adverse reactions

These safe use guidelines are based off research into the clinical and research use of psychedelics.

“Persisting adverse reactions are rare when research is conducted along these guidelines. Incautious research may jeopardize participant safety and future research.”3

While not LSD, magic mushrooms are decently similar in effects and therapeutic potential to LSD.

Many LSD users are instead seeking to optimize fun instead of lasting positive benefits and safety, in which case some of these guidelines may not apply. For example, if optimizing more for fun and less for safety, a user may prefer not to use a blindfold and headphones, and may choose to drop acid at a festival or in nature instead of in a safe home environment.

We believe the most important tips that should be followed by everyone regardless of their purpose for taking LSD are:

These risks can be reduced to near zero with proper precautions.

It’s also preferrable and possible to reduce the risk of having a bad trip.

What correlates with having a bad trip?

Avoid if you have any of these contraindicated conditions:

💉 2. Avoid drugs that interact with psychedelics

SSRIs are not reported to cause a dangerous interaction, though they are reported to substantially decrease the effects of LSD.

Some users choose to consume cannabis while on LSD. Research recommends against this for anyone seeking to minimize risks and anxiety while tripping.3

You’re more likely to benefit from psychedelics in clinical settings when starting first with low doses. “The researchers also found that participants who received lower psilocybin doses before the higher doses were more likely to have long-lasting positive changes in attitudes, behavior, and remembered mystical-type experiences than those who received the highest dose first.” Following the researcher’s protocol would approximately involve doing a 30-40 microgram trip first, then a 60-80 microgram before anything larger, then a 120-140 microgram before anything larger, then either stopping there (this was the dosage that resulted in the highest increase in well-being) or doing a 170-240 microgram trip.9 8 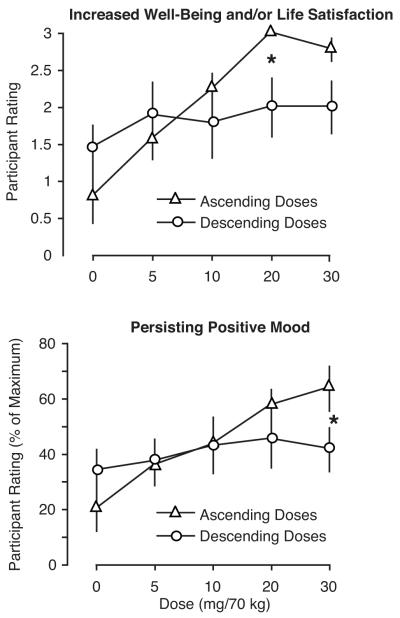 If you’re particularly eager, you can skip the smallest dose and jump to ~67 micrograms first.

Ensure high confidence in your dosage

Anecdotal reports suggest that dosage per tab is much easier to assess for LSD acquired online, and that acquired acquired offline varies wildly in how accurate what you’re told the dosage is vs what the dosage really is.

You should re-assess your dosage and start at a low dosage again every time you get LSD from a new source.

Does dosage vary by weight?

It doesn’t seem like dose should vary by weight, at least not much. This is possibly because people who weigh more have more serotonin receptors and therefore don’t need a larger dose to account for increased weight. Though more research is needed.12

How can I convert between LSD (acid) and shrooms dosages?

To approximately convert from LSD to shrooms: LSD dosage in micrograms * 0.024 = shrooms dosage in grams.6 10

This is a rough approximation for many reasons, including that mushroom potency can be quite varied.

💯 4. Buy a test kit to ensure your LSD is not fake

If you’re not certain that it’s real LSD, it’s absolutely not worth taking it given the physical and mental risks that other common “fake acid” substances may possess.

Unfortunately, other substances are sometimes sold as LSD (acid). Of particular concern is NBOMe which unlike LSD, does not have low physiological toxicity, and sadly NBOMe has been involved in a few deaths in the last few years.4

The most important test kit for LSD is the Ehrlich reagent.

Shrooms may be safer than LSD

The risk of getting a dangerous counterfeit substance is dramatically lower with shrooms.

Shrooms also last for ~6 hours all up as opposed to ~12-18 hours, which is can be easier on the user and increases the chance you will be able to find a willing trip sitter. Trip sitters strongly increase safety and can also increase enjoyment by helping significantly shorten the duration of any anxiety.

If your LSD has an extremely bitter taste and/or numbs your mouth after a few minutes, spit it out. Anecdotal reports suggest extreme bitterness indicates the presence of some NBOMe. This is not a great method, as it is both unreliable and can be an anxiety inducing way to begin an acid trip.

Blotter and/or ink may taste slightly bitter, so this method is not flawless (anecdotal reports).

Additionally, some DOx chemicals are orally active and will still have effects when swallowed.13

“NBOMes were initially thought to be orally inactive, meaning they wouldn’t work if swallowed. However, this is not the case for all NBOMes per se; certain NBOMe salts do have an observed oral bioavailability, with little known about the oral bioavailability of NBOMes in their freebase form. Therefore, when a substance might be an NBOMe, discard the blotter entirely rather than swallowing it, if you do not wish to risk being under the influence of an NBOMe.”14

If you aren’t willing to use a test kit but do have access to a UV/black light, following this guide is better than nothing. A test kit is certainly better, as this method is not foolproof: some paper glows under UV light regardless, and long exposure to UV will destroy LSD.

😇 5. Have a trusted, sober guide who is experienced in supporting psychedelic sessions

In research on bad/challenging trips with psilocybin, “only 2.7% [of the people reporting a bad trip] had a trusted and sober guide present who was experienced in supporting psychedelic sessions.”6

“It is difficult to overemphasize the importance of the interpersonal atmosphere created by study staff in influencing a volunteer’s response to a hallucinogen.”3

Anecdotal evidence suggests that having a sitter that is not familiar with descriptions of altered states of consciousness can lead to unpleasant experiences.

A pleasant environment may reduce the chance of bad feelings while tripping.3

A non-house environment increases the chance of something unexpected happening. Unexpected things can be hard to deal with on psychedelics. Please wait until you at least have a few experiences at the given dosage level before doing things like tripping in very public environments.

😄 7. Wait until you’re in a good mindset

Your trip will likely be easier and more enjoyable if you’re in a good mindstate both on the day, and have been in a good mindset in general in the previous few weeks.

While you’re on psychedelics, you’ll need to give up control and the desire to understand everything that is happening to you.

“Whenever in doubt, turn off your mind, relax, float downstream.”

People are more likely to have challenging experiences (“bad” trips) if they have:

Eyeshades and headphones can make it safer. “The employment of eyeshades and headphones (through which supportive music is played) may contribute to safety by reducing the distractions of environmental stimuli and social pressures to verbally interact with research personnel. This may be especially important for volunteers who are experiencing the effects of a hallucinogen for the first time.”3

Have an appreciation for how powerful the psychological effects of psychedelics can be.3

Don’t trip again until you’ve completely integrated your previous trip into your life.

“People can have these experiences and get puffed up about them, rather than approaching them with humility,” Bogenschutz said. “They can become more grandiose and think they have special knowledge and wisdom.”2

🗓 11. Don’t trip again until you feel your previous trip has been fully integrated into your normal life

Integration involves taking your experience and trying to get positive benefits from it in your daily life.

Make no major decisions until at least a day or two, perhaps a little longer.15

More followup care should be given to those who consumed 150 micrograms or more.15

If needed, check out this list of psychedelic integration service offerings.

📅 Follow these tips for the day of your trip

What are the best activities for an LSD trip?

What if I’m concerned about my own use or a loved one’s use of LSD?

Please read this free guide: the 20 minute guide. It’s for parents, but it applies to friends, etc. There’s also a separate version for romantic partners.

Alternatively, there’s a full book version of the same guide called “Beyond Addiction” which is excellent, or you can buy the PDF of the 20 minute guide.

Please start with the above resources, even if you’re ready for treatment.

What about taking higher doses?

This advice seems pretty helpful for taking high doses on this reddit thread.

And see how to help someone having a bad trip on LSD/shrooms.

Want to learn about the therapeutic use of psychedelics including shrooms and LSD? See our page on psychedelic therapy.

“In a study of nearly a hundred people who took a psychedelic, guided as outlined in this manual, seventy-eight percent reported, “It was the greatest experience of my life.” This response was true even for those people who had taken a psychedelic many times before.” Read the EntheoGuide

How to take Shrooms