Effects of Edibles by Dosage and Tolerance

A graph from a 1980 research paper showing how long you’ll stay high for: 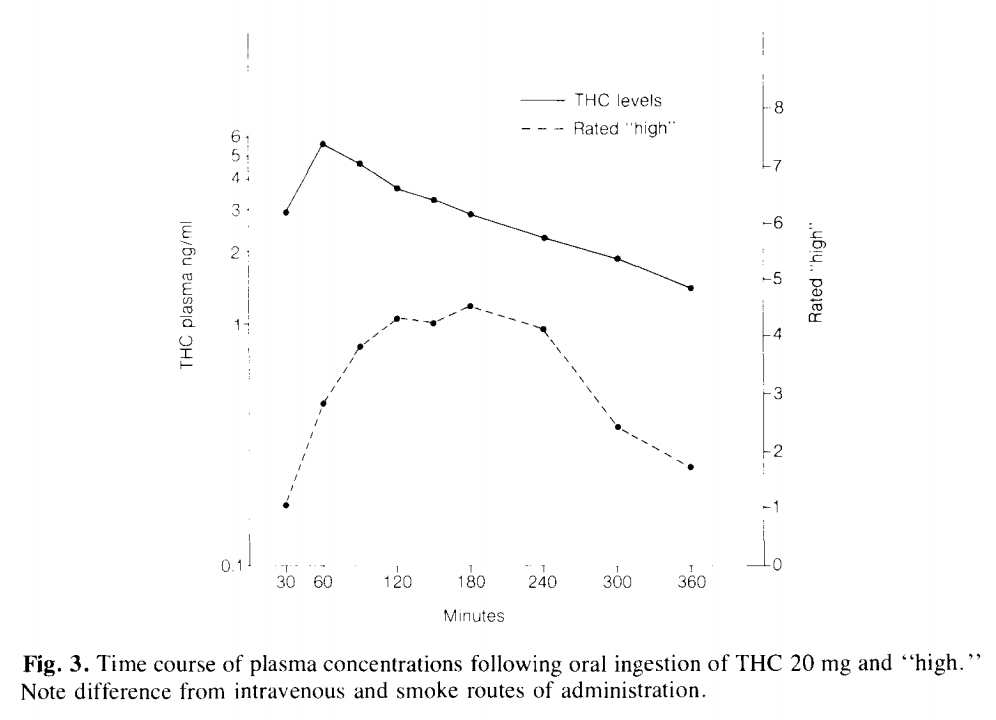 In this experiment, participants still felt a little bit high after 6 hours, though not close to peak levels.4

2. It’s really easy to eat too much - you’ll be fine, but it might be uncomfortable

Read the packet. Make sure you know if it’s X mg of THC per serving, and how many “things” are in a serving.

As a very rough approximation, smoking a 1⁄2 gram standard joint by yourself would lead to similar levels of highness as a 10 mg THC edible.

Even doing 2mg will get people without a tolerance high - at this dosage you may still find it reasonably easy to have conversations with people, and as the dosage goes beyond 5mg conversing will get increasingly difficult for most people.

👍 If you don’t have experience with altered states of consciousness or are concerned about possible anxiety, try 2mg of THC for your first 3 times, and then try 5mg, before going any higher.

If 5mg isn’t enough, wait 2 hours to make sure it’s taken effect, and then try taking another 5mg. Don’t add on 10mg - you’ll still have much of the 5mg in your system.

If 5mg wasn’t enough, next time start with 7.5mg or 10mg - don’t jump to 20mg. It would be even smarter to try 5mg two more times, as about 40% (anecdotal reports) of weed users find it hard to get high the first few times they use.

If you’re on a full stomach, it may take 1.5 hours before you start feeling pretty high and 2 hours or more for full effects.

It might be more like 1 hour before feeling pretty high and 1.5 hours for full effects on an empty stomach (anecdotal reports).

We don’t really know exactly why this is, though it seems to be a commonly reported occurrence.

Try a low dosage a few times first before going above 5mg - you might be taking the perfect dose, but you’re just experiencing the “first time user tolerance” effect of weed.

6. If you took too much: Tell a friend to read the “bad trip” guide and help you

Symptoms of a moderate to intense high (doesn’t necessarily mean you took too much):

No-one has ever died from overdosing on marijuana.5

If you have paranoia/anxiety and want to reduce it, try any of the following:

Remember, the main effect of taking too much is just paranoia. Thousands of people take too much weed each year, they feel really uncomfortable for up to ~12 hours, and then they all feel fine again.

Guide to help someone having a bad trip (including if you’ve eaten too much edible weed).